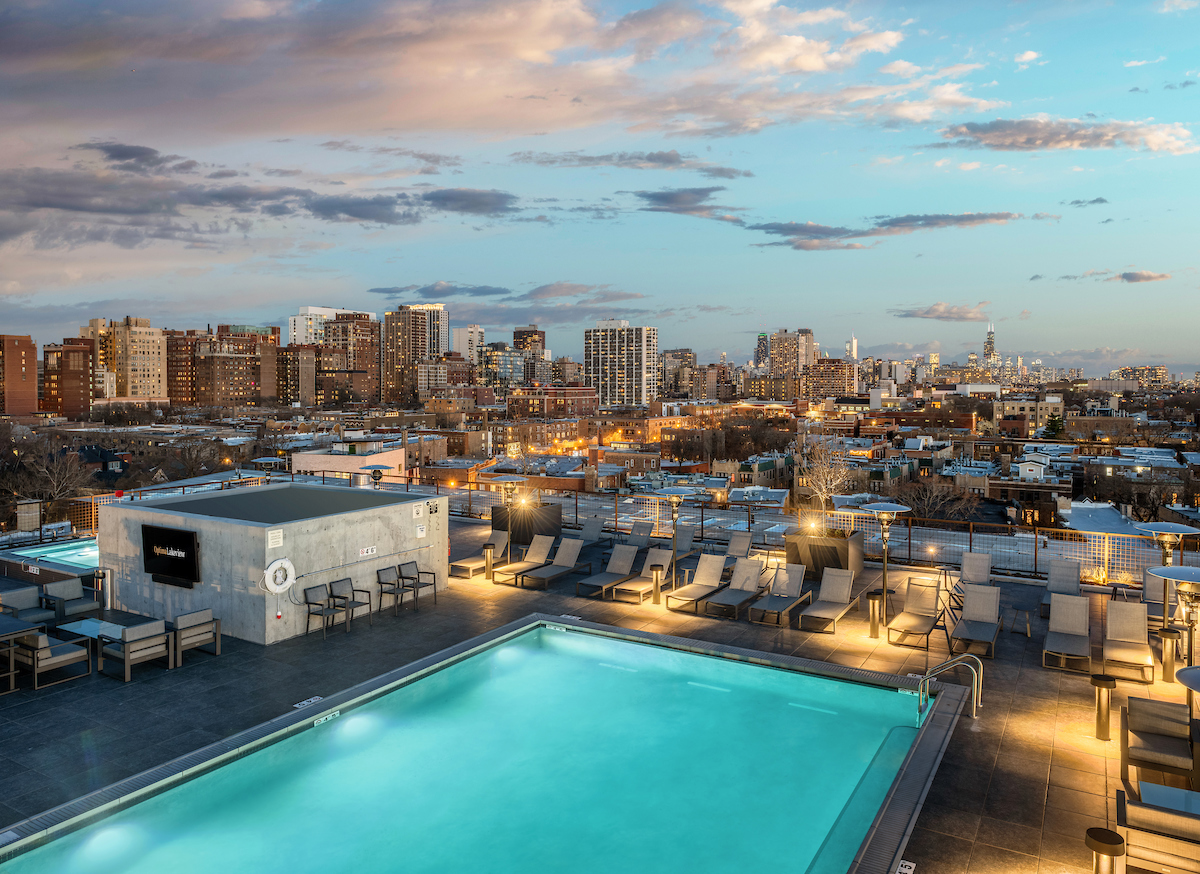 Chicago boasts of the best skylines in the country, and there is no better place to revel in the city’s one-of-a-kind architecture than Optima Lakeview’s very own sky deck. And not only does the sky deck provide views of the city from the lakefront to Wrigley Field, but it also allows residents to enjoy the fresh air year-round with access to a range of unique, extensive amenities.

Optima Lakeview’s unparalleled sky deck has a surprise around every corner. From the resort-style pool and spa that stays heated for year-round use to the fire pits featuring lounge seating, residents will be able to go for a swim or relax at any moment. Our design provides plenty of ways for residents to stay physically and mentally healthy and embodies our dedication to creating spaces where residents can be active, inspired and entertained.

Because of the sky deck’s versatility and unique amenities, the space is more than just a hub for wellness and relaxation, it’s also a space for residents to connect with their larger community. The BBQs, outdoor kitchens and theater provide the perfect opportunity for families and friends to convene and enjoy a movie and dinner under the stars. The space also features a glass-enclosed party room where residents have access to an extensive lounge area for entertaining. And, with views spanning the whole city, and Wrigley Field only a half-mile away, the Sky Deck provides the perfect opportunity for Chicago Cubs fans to throw their own viewing party. 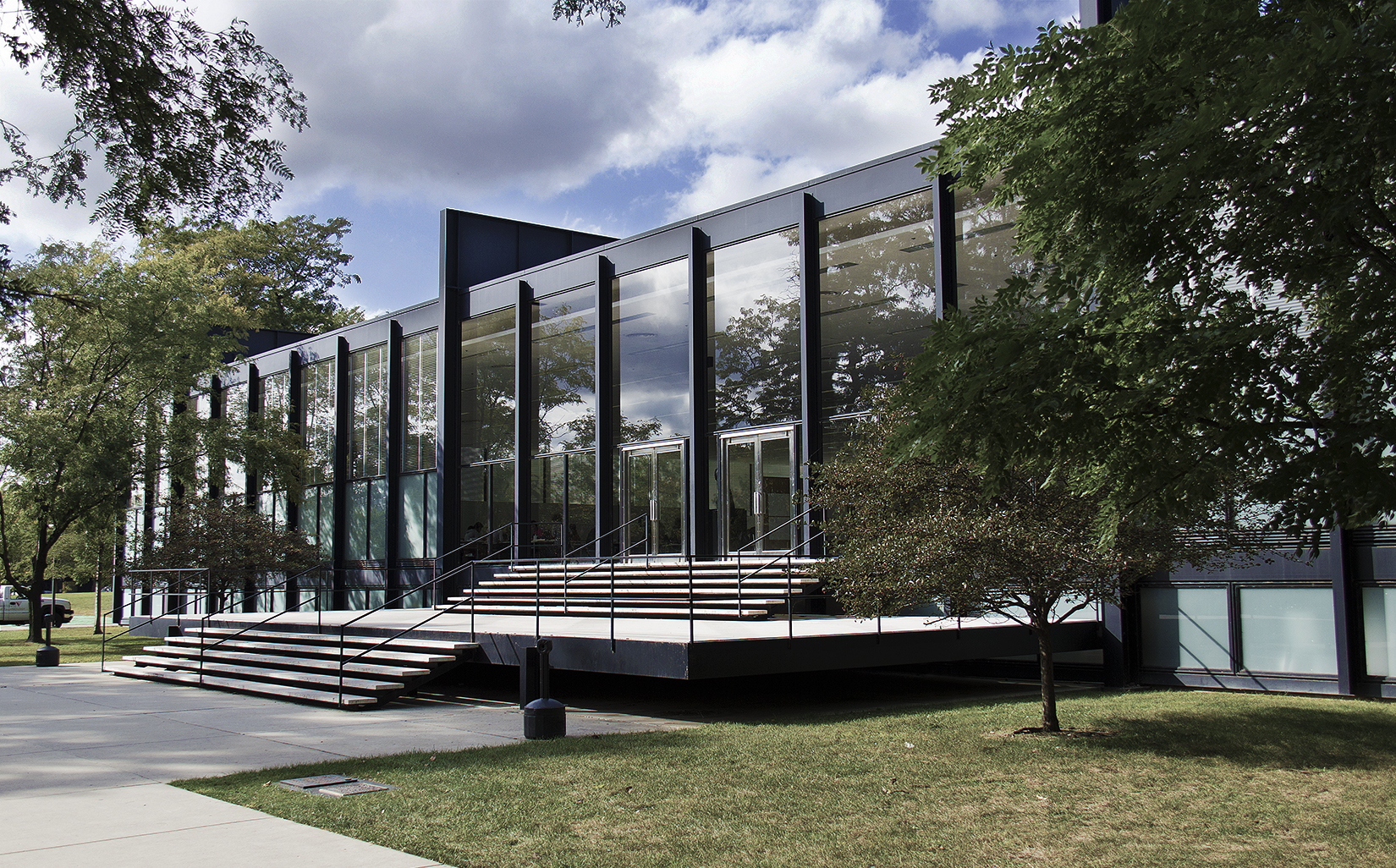 Mid-Century Modernism defines the Chicago skyline. Organic forms rise from Chicago’s foundation and cast shadows across the Lake while innovative use of glass reflects waves of light onto the city streets. The Willis Tower, Marina City, the Aon Center are all notable examples of the mid-century modern masterpieces towering over the city.

Chicago’s mid-century modern skyline would not be complete without the exceptional contributions of architecture titan Ludwig Mies van der Rohe. Born 1886 in Germany, Mies emigrated to Chicago in the 1930s due to the rise of Nazism in Europe. Already an esteemed architect, in Chicago Mies accepted the position as head of the architecture school at the Armour Institute of Technology (now the Illinois Institute of Technology). At IIT, Mies was commissioned to design buildings for the campus which still stand today. These buildings include Alumni Hall, the Carr Memorial Chapel, and S.R. Crown Hall, some of Mies’ many masterpieces.

Mies aspired to create architecture that represented modernity with clarity and simplicity. In 1951, Mies completed the two residential buildings of 860-880 Lakeshore Drive which are considered Chicago Landmarks and are listed as National Historic Places. Initially, the towers were viewed critically. However, with time the buildings became the prototype for steel and glass skyscrapers around the world.

Mies also designed Chicago’s Federal Center Plaza which is composed of three buildings; the Everett McKinley Dirksen courthouse building, the John C. Kulczynski building, and the Post Office building. The three buildings situate themselves around a plaza with Calder’s red Flamingo sculpture at the center. The plaza serves as one of the main gathering points in the Loop, Chicago’s commercial center.

Not too far away at 330 North Wabash sits the former IBM Plaza and Building, one of the last American projects designed by Mies. Built in 1973, the building was designed with advanced technology in mind and became well-known for the several atypical features it included as an office space at the time. Today, the Chicago Landmark is known as the AMA Plaza and includes the Langham Hotel, often regarded as one of the best hotels in the nation.

The Promontory, situated at 5530 S Shore Dr, stands 22 stories over Chicago’s Promontory Point and extensive shoreline in the Burnham neighborhood. Mies built the structure with a “Double T” design in which horizontal cross-bars join and the stems of the T’s form wings to the rear. Mies would employ this design in many of his future buildings.

The Farnsworth House, designed as a vacation retreat for Dr. Edith Farnsworth, is located just outside of Chicago in Plano, Illinois. Though the Farnsworth House is not a grand skyscraper, it has left a lasting impact on the Chicago architectural landscape. The house was an exploration for Mies in the convergence of humans, shelter, and nature. Consisting of a glass pavilion raised six feet above a floodplain beside the Fox River, the house has been described as “sublime” an “a poem” and is now a public museum.

Today, Chicago’s skyline has completely transformed from what it was more than 50 years ago when Mies passed. However, even as it continues to evolve with every new development, Mies iconic buildings still stand out as striking, inspiring architectural masterpieces.