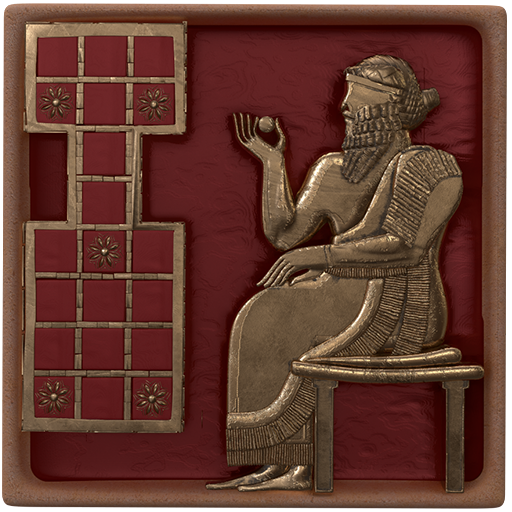 The Royal Game of Ur received its name from a British archaeologist named Sir Leonard Woolley in 1928. He was part of a team that excavated five worn boards at the Royal Cemetery of the Sumerian City of Ur. These ornate boards, made of wood, lapis lazuli, and inlaid shell are expected to have been made between 2600-2400 B.C. Making the Royal Game of Ur the oldest tabletop game.

Also known as the Game of 20 Squares, it appears to have been immensely popular with people of all classes according to archaeological evidence. With the game being so widely played, it spread across many Middle Eastern countries we know today. Iran, Syria, Egypt, and Lebanon are a few to name. Archaeologists have also discovered that when no board was available, players scratched it into clay or rock.

Even though the Royal Game of Ur was very popular in ancient Mesopotamia for 1,000 years, its popularity and instructions waned as more games were introduced.

Consequently, figuring out the rules of the Royal Game of Ur was no easy task. It took Irving Finkel, a curator and Assyriologist at the British Museum to uncover the instructions of this ancient game. Dr. Finkel received a crumbling clay tablet from an antiquities dealer in the 1980s. It was inscribed with what appeared to be the rules of a game.

His research led him to Itti-Marduk-balatu, the author of the 177-176 B.C. tablet. Later, Finkel was able to decipher the rules by comparing them with other games.

This led to an understanding that the Royal Game of Ur is a race between two players. With the single goal of getting all 7 pieces across the board before your opponent.

So How Does One Play The Royal Game of Ur?

Fast forward to today. The Royal Game of Ur is back in the mix, and attracting fellow gamers near and far! Here are the rules:

Finally, if you weren’t planning on time traveling several thousand years ago to discover an ancient Ur board. Get your very own modern Ur board in this New York Times article!

Check out the not so distant relative of The Royal Game of Ur, Backgammon.