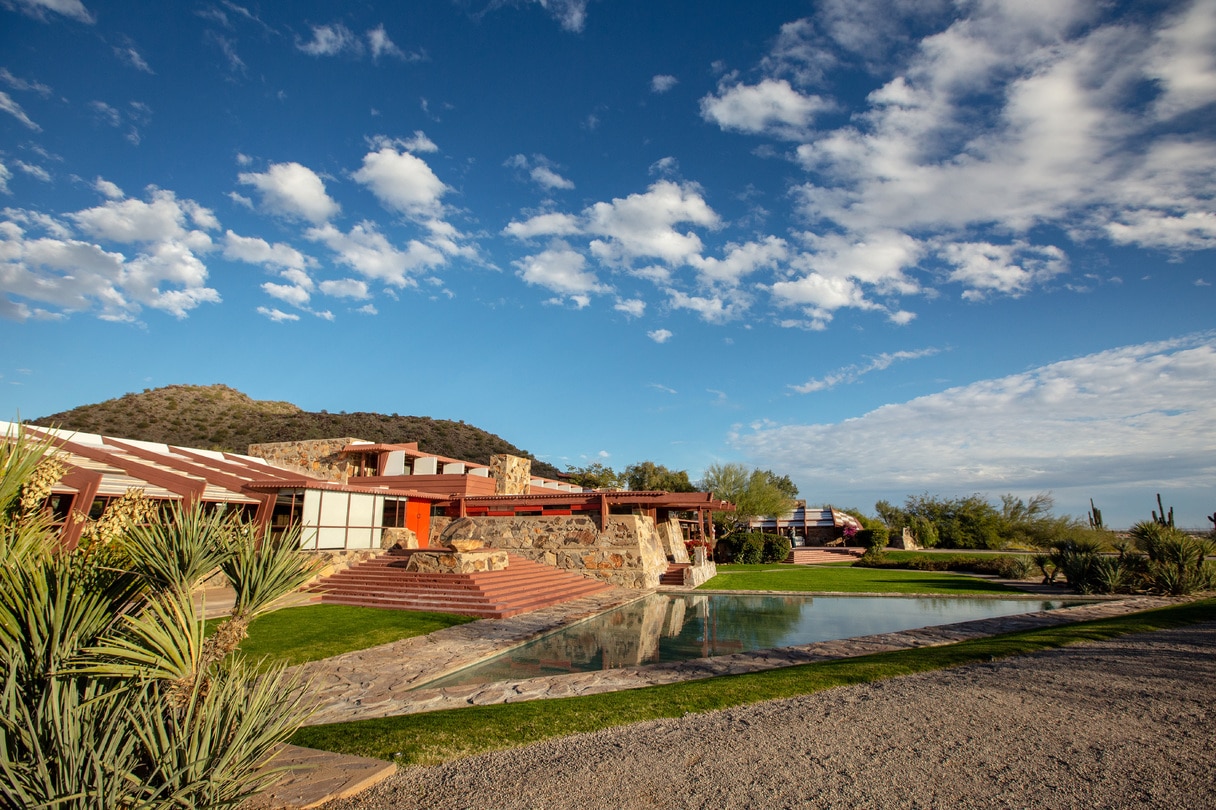 While Frank Lloyd Wright’s Taliesin was the first of his residences and studios, Taliesin West, a monumental exploration of Wright’s unique approach to organic architecture, is arguably Wright’s most intimate creation.

Following the completion of Taliesin, where Wright lived and worked for nearly 30 years, the famed architect became interested in relocating to a warmer climate. In 1935, he purchased 495 acres of stunning Sonoran Desert below McDowell Mountain just outside of Scottsdale. Taliesin West brought extraordinary life to Arizona’s then-desolate desert, and, after nearly nine decades, the complex continues to advance Wright’s legacy and his iconic designs.

Similar to Taliesin, Taliesin West drew great inspiration from its brilliant surroundings. While working with a group of apprentices throughout the construction process, Wright took advantage of the unique materials found in the surrounding landscapes. Using a mixture of local rocks, cement and desert sand, Wright and his team created, often by hand, what many describe as “desert masonry” to help structure the campus.

The complex is situated with various unique architectural elements that accentuate its deep-rooted connection to nature. Translucent canvas (now plastic) once covered the roof of many rooms within Taliesin West, creating an illusory linkage to the warm outdoors. Other features include lofty redwood beams accenting the building’s cold structure.

Throughout Wright’s life, the campus served as both a winter home and a desert studio. While Taliesin West never experienced any misfortunes, unlike its sibling complex Taliesin, the space did experience numerous renovations throughout the period from 1937 to 1959 when Wright lived and worked there. Some of the renovations included the addition of a drafting studio, dining hall,  workshop, three theaters, Wright’s office and living quarters, and the residences for his apprentices and staff. Various decorative walkways, gardens, terraces, and pools acted as both luxuries to the property and connections to each larger structure.

Today,Taliesin West serves as the headquarters for the Frank Lloyd Wright Foundation and, until 2020, was the winter home for The School of Architecture at Taliesin. The inspiring architecture was added to the U.S. National Register of Historic Places in 1974, was recognized as a U.S. National Historic Landmark in 1982 and was designated a UNESCO World Heritage Site in 2019.

Found just a short drive from the heart of Scottsdale, Taliesin West offers the perfect trip for anyone seeking to explore one of Arizona’s most exciting works of architecture. The complex hosts a variety of events and programs throughout the year and presents visitors with numerous tours that can be discovered on their website here.

Frequently referred to as the father of American modernism through his establishment of the Prairie School of architecture, Frank Lloyd Wright gifted the world with many culturally-significant designs, forever leaving his stamp on American architecture. Many of Wright’s designs are widely celebrated and remain standing today, including Taliesin, one of his most iconic works that altered his life and the lives of those around him while serving as his studio.

The archetype of Prairie School architecture was built in 1911 by Wright after he had left Oak Park, Illinois to return to his family’s land in Spring Green, Wisconsin. Derived from Welsh mythology, Taliesin was an ancient poet, whose name means radiant brow. Wright built the exemplary estate in a Wisconsin River valley into the brow of his favorite hill from boyhood, hence its name.

During the process of designing Taliesin, Wright drew inspiration from the patterns and rhythms of his surroundings. He became inspired by the thought of living among his ancestry and the nature that surrounded him as he embodied the idea of organic architecture within his design. Wright refined visions from his previous Prairie School designs, including a lush courtyard and open floor plan, and used local limestone and sand from the Wisconsin River to invite the outdoors indoors — a radical idea at the time.

Throughout the estate’s history, it suffered a number of accidents, including two fires that sparked Wright to complete two renovations on Taliesin. The first of which, Taliesin II, was completed in 1915 after arson had destroyed one-third of the house, including Wright’s living quarters. The redesign was nearly identical to the architecture in Taliesin I, excluding its new observation deck and, in an attempt to make the estate completely self-sufficient, Wright’s hydroelectric generator.

Following another destructive fire in 1925, Wright was forced once again to pour new life into Taliesin and went to develop the third rendition of the estate, Taliesin III. Through the devastation, Wright remained committed to his passion for thoughtful architecture and brought a breath of fresh air to the bare structure that surrounded him. While living at Taliesin III Wright also designed some of his more renowned work, including Fallingwater, the headquarters for S.C. Johnson and Jacobs I (the Herberg Jacobs House).

Beginning in 1932, Wright established the Taliesin Fellowship and hosted 50 apprentices at Taliesin on an annual basis, giving them the opportunity to work for him for a lengthy period of time and experience his intensive working environment. Today, the estate is in the hands of the Frank Lloyd Wright Foundation, and the fellowship uses the neighboring Hillside School as its home base. The esteemed property was listed in the National Register of Historic Places in 1973 and was recognized as a National Historic Landmark in 1976.

Located just a few hours outside of Chicago, the Taliesen estate is the perfect day trip for anyone who appreciates breathtaking architecture and offers visitors a variety of tours designed for every level of interest, which can be booked on their website here.