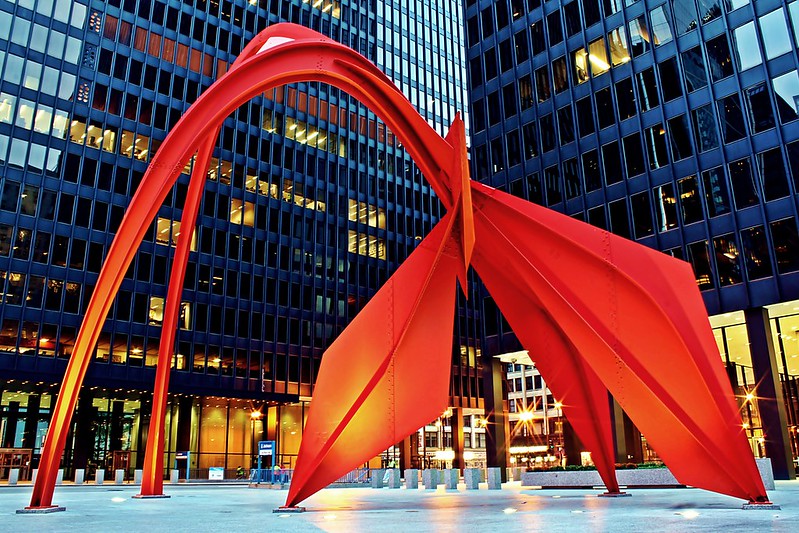 On a fall day in October of 1974, Chicago unveiled a majestic new piece of public art: a grand steel archway in a striking red color. Alexander Calder’s Flamingo officially made its mark on Chicago’s Federal Plaza, and has been an icon ever since. In honor of the sculpture’s debut, October 25, 1974 was dubbed “Alexander Calder Day,” and featured a circus parade to celebrate the artist’s great contribution to the city and to the greater world of art.

Although Alexander Calder Day officially occurred 46 years ago, Calder’s impact is still monumental, both in Chicago and around the globe. Alexander Calder’s legacy includes collections at notable museums around the world, large scale public works and a posthumous Presidential Medal of Freedom awarded by President Gerald Ford (although the Calder family boycotted the ceremony). And Flamingo has its fair share of fame as well (even earning a scene in the movie Ferris Bueller’s Day Off).

Whether it’s his work hanging in our own buildings or his impactful public artwork, we hold Calder’s work and legacy in high honor. From our team at Optima, Happy (slightly belated) Alexander Calder day! 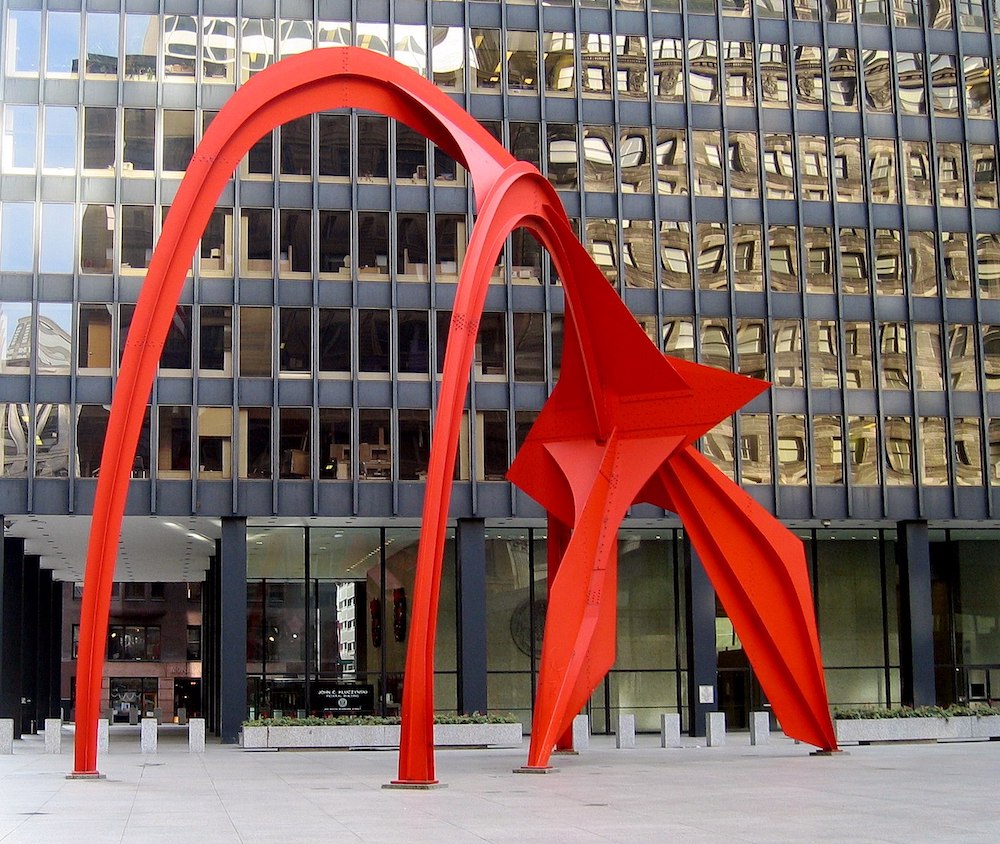 Sculptures are art made architectural; dramatic corners, inventive materials and a consideration of space and its voids. At Optima, our appreciation for sculpture runs deep, with Optima co-founder David Hovey Sr. expanding the design reach of Optima to include his own original sculptures. Indulging in our love for the craft, we’re exploring Chicago’s public art, piece-by-piece. This week, it’s all about Alexander Calder’s famous Flamingo.

Though you might not notice it immediately as a flamingo, every Chicagoan is familiar with the long and graceful arcs of the famous red Flamingo sculpture designed by Alexander Calder. Calder is a seminal Modernist multi-media artist perhaps best known for his many whimsical mobile creations.

The Flamingo, however, is the antithesis of his mobile sculptures set apart by their dynamic motion — he referred to the goliath sculpture as a “stabile,” a freestanding abstract sculpture made in the style of a mobile but sitting rigid and stationary. It is this peculiar approach that gives The Flamingo an inevitable feeling of potential energy, instilling an almost alien vitality to the Federal Plaza where it lives.

Weighing in at 50 tons and made of steel, the sculpture feels anything but heavy in the space it occupies. Its arches and voids invite passerby to walk beneath and through the art on their way to surrounding office buildings in the plaza  — including the Ludwig Mies van der Rohe-designed Kluczynski Federal Building.

The sculpture was designed specifically for this space, to add a lightness and balance to the severity of the Federal Building’s Modernist lines. Unveiled on October 25, 1974, at the same time that Calder’s Universe mobile was unveiled at the Willis Tower, the momentous, art-filled occasion was declared “Alexander Calder Day” and even featured a circus parade.

The festivity, spirit and joy of this sculpture and its history are apparent to all that visit it on display in Chicago, adding yet another meaningful and momentous sculpture to our city’s iconic and artful culture.

Founded in 1916, The Arts Club of Chicago was founded by artists and advocates after The Armory Show garnered negative attention when it exhibited at the Art Institute. As the first major exhibition of modern art in America, Chicagoans were shocked and scandalized. The Club’s founders took note of the negative reception and aimed to normalize modern art by curating exhibits tailored to Chicago, enabling the Club to present new, cutting-edge culture for residents and visitors alike.

Over the years, the Club has moved from an office space, to Michigan Avenue, to the Wrigley Building;  in 1951, it moved to 109 East Ontario Street. The new space was created just for The Arts Club by architectural legend Ludwig Mies van der Rohe. Sadly, in 1990, the owner sold the building, which led to The Club’s current John Vinci-designed two-story building located in Streeterville. Although much of Mies’ architectural work was lost in the move, the building remains an homage to his design and his steel staircase was restored and remains the focal point of the first-floor space, adjacent to Alexander Calder’s Red Petals.

Today, The Arts Club offers three or four major public exhibitions a year, along with displaying work from its permanent collection. The Club also offers a broad, rich calendar of programming, bringing lectures, demonstrations, gallery talks, films, music, dance presentations and other educational programming to Chicago, and to our Optima communities.

For hours and visitor information, visit The Arts Club of Chicago website. 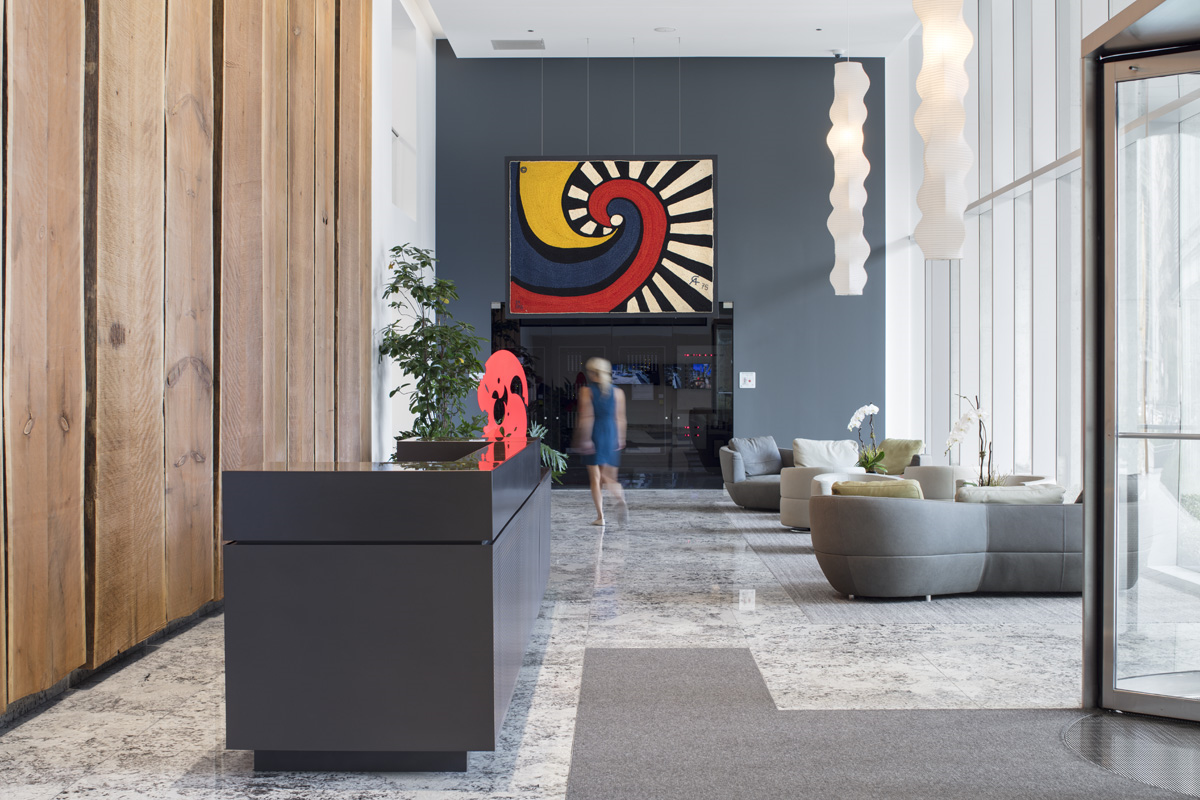 It’s no secret that we love color at Optima, and we carefully curate our interior furniture, textures and designs to reflect the vibrancy of our spaces. Our curated artwork is no exception, and throughout the halls of projects such as Optima Signature, Alexander Calder’s bright works greet residents with bold tones and distinct shape. A multimedia artist whose influence spans across decades, Calder’s work creates a meaningful connection to a rich piece of art history.

Born in Pennsylvania in 1898, Calder came from a family of artists; his grandfather and father both had rich careers as sculptors and his mother was a professional portrait artist. Though his family had artistic roots, they supposedly did not want him to follow in their footsteps. Calder began studying mechanical engineering in New Jersey, bouncing between jobs all while still being inspired by create. By the 1920s, Calder had moved back to New York to pursue a career as an artist.

After studying in New York, Calder moved to Paris where he studied, established a studio and met his future wife. While living in Paris, Calder joined the ever-growing network of avant-garde artists, including Fernand Léger, Jean Arp and Marcel Duchamp. Throughout his life, Calder maintained a strong connection to France, naming many of his works in French regardless of their location. After a lifetime of impactful creativity and exploration, Calder died unexpectedly of a heart attack in 1976, leaving behind an expansive and far-reaching legacy.

Over his career, Calder produced a wide range of work, spanning from sculpture, to stage sets, paintings, prints and jewelry. Like previous generations of Calders, he was also a recognized large-scale sculptor. Flamingo, one of his more notable works in Chicago, adorns the Federal Plaza with beautiful form and the famous “Calder Red” color. We’re thrilled and honored to have the works of Alexander Calder throughout our buildings, and hope they bring a bright source of inspiration to those who view and enjoy them.