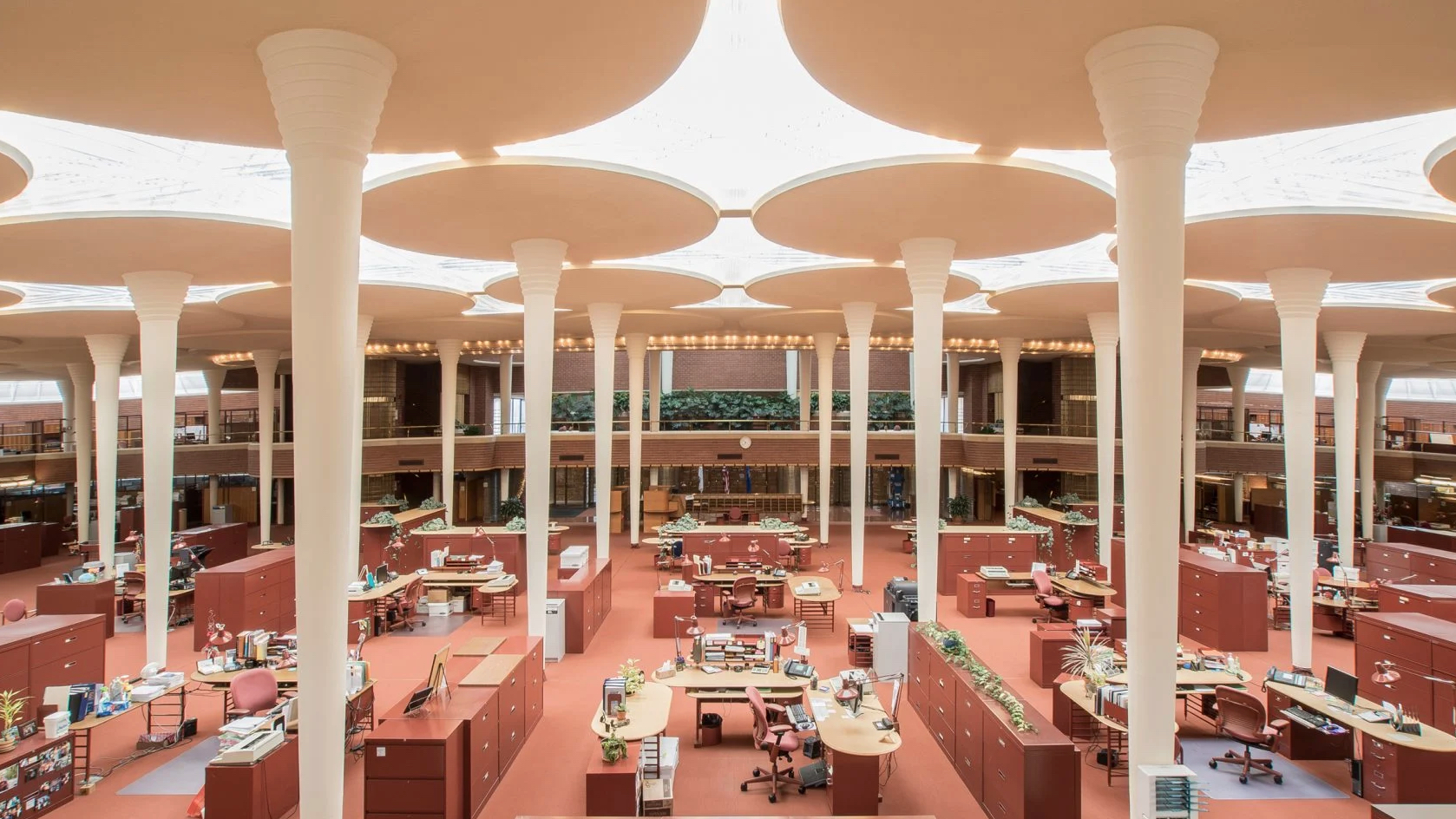 On December 9, 2022, Christie’s auction house held a special auction to release a collection of rare drawings, glasswork and furniture produced by legendary architect Frank Lloyd Wright. The collection was put up for sale by Grand Rapids-based Steelcase Corporation, the iconic American furniture manufacturer that enjoyed a unique relationship with the famed architect. Today, we’re taking a look at the treasured work:

In the mid-1930s, Wright was working on his seminal corporate design for the Johnson Wax Headquarters, commissioned by S.C. Johnson & Son in Racine, Wisconsin. He approached Steelcase with the hopes of working with them to manufacture furniture for the building. Decades later, in 1985, Steelcase bought the Meyer House — a home designed by Wright in 1909 in Grand Rapids, Michigan — to celebrate the spirit of innovation and collaboration between Wright and Steelcase that began during the Johnson Wax Headquarters project. Steelcase set out to uncover the original designs of the home, and after several years of extensive research, they accumulated a number of Wright’s original drawings that documented the architect’s vision. After a two-year restoration that included demolition of a 1922 addition to the home and fanatical attention to hundreds of interior and exterior details, the Meyer House stands as the most complete and authentic restorations of all of Wright’s designs.

Taken together, the projects represent unique and different moments in Wright’s career. The Meyer House is a prime example of his Prairie School era, a period of roughly 15 years in the early 1900s when commissions most often came from affluent families before he shifted focus to more. These designs typically feature hip roofs with long eaves, art glass ribbon windows and strong horizontal lines.

Wright designed multiple residential structures in this style for about 15 years in the early 1900s before shifting focus to more democratic architecture. The S.C. Johnson building, on the other hand, is considered Wright’s corporate masterpiece; today it remains one of the most important examples of the American corporate office building.

The pieces included in Christie’s auction come from these two projects and include the executive desk master and executive arm chair master from the S.C. Johnson project and windows from the Meyer house. Wright’s original drawings for the furniture he designed for both the Johnson Wax Headquarters and the Meyer House were also sold, including schematics for an officer’s chair from the S.C. Johnson building and the sofa and living room table from the Meyer House.

It’s not often that fans of Frank Lloyd Wright fans have the opportunity to acquire processual works — in this case, drawings, windows and furniture that reveal the process that Wright and his clients used to produce masterpieces.