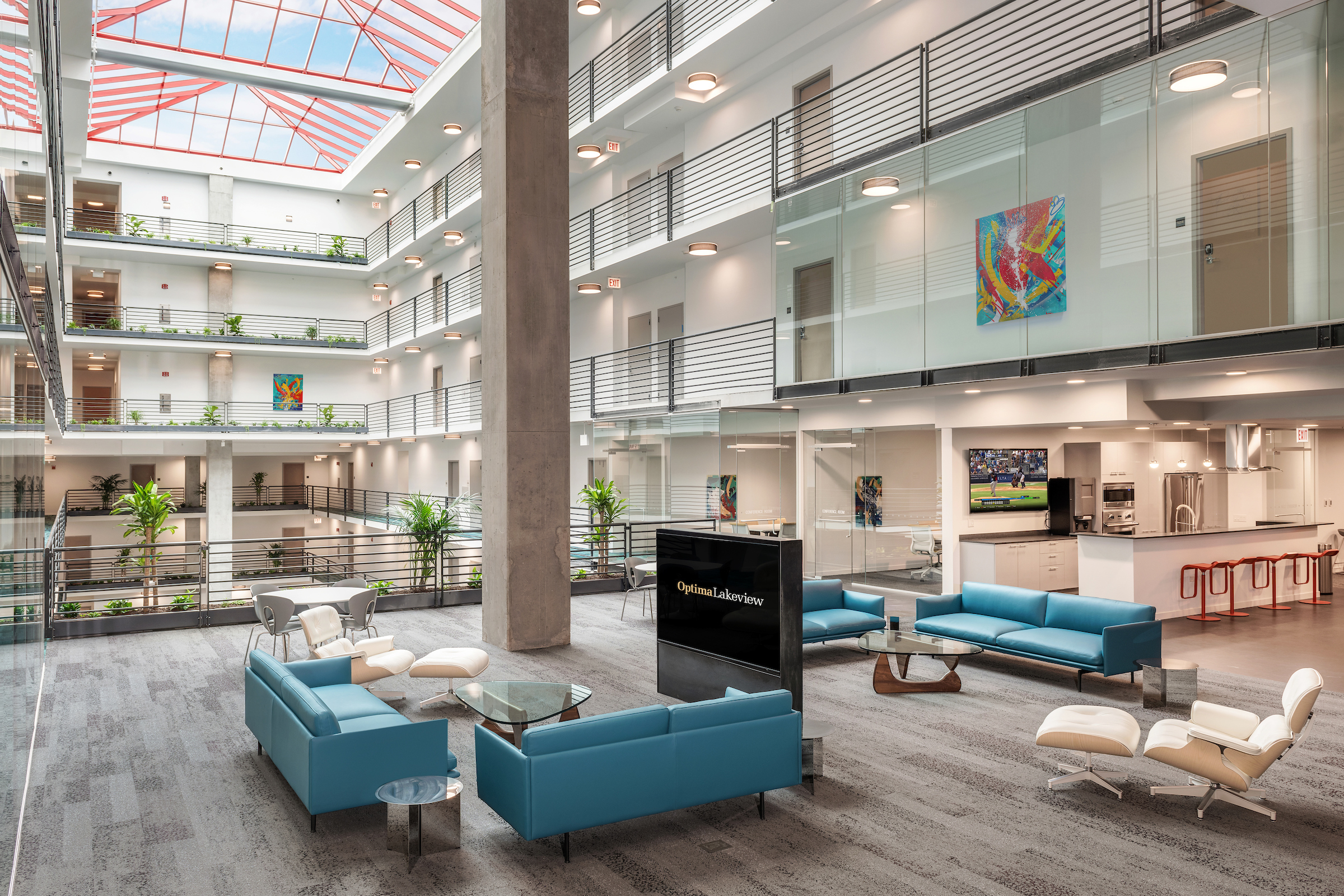 What can we possibly say about the Eames Lounge Chair that hasn’t already been said before?

There’s not a collection of modernist furniture design anywhere that doesn’t feature the Eames Lounge Chair and Ottoman — and this is certainly the case with the curated furnishings in every Optima community. It’s always a pleasure to spotlight this timelessly beautiful expression of art, architecture, materiality and technology that sprang from the creative genius of Charles and Ray Eames.

To appreciate the evolution of the Eames Lounge Chair, it’s helpful to understand the design process that Charles and Ray employed. It began when the couple turned their Los Angeles apartment into a workshop in 1941 and began building a device for molding plywood. Their goal at the time was to develop the capacity to apply pressure to plywood without breaking it, which would give them the opportunity to produce a host of objects that interested them at the time — chairs, sculptures, aircraft parts, leg splints and children’s furniture and toys. After many attempts and failures, the Eameses mastered the three-dimensional molding process with an apparatus for bending wood — a kind of curing oven made from wood scraps and spare bicycle parts. They called it the Kazam! machine. With its hinged and bolted curving plaster mold, the Kazam! machine allowed them to create a glued sandwich consisting of several layers of veneer, which was then pushed against the plaster mold by a membrane which, in its turn, was manually inflated by a bicycle pump.

Putting the Kazam! to Work
First produced in 1956, the iconic Eames Lounge Chair draws inspiration from a classic English Club Chair. It consists of a bent-wood frame atop a six-legged base, constructed using the Kazam! machine, and tilted at an optimal angle for comfort and ergonomics. It’s topped with supple leather, which the Eameses described as providing “the warm redemptive look of a well-used first baseman’s mitt,” in their vision to make the chair “a special refuge from the strains of modern living.”

A Standout from the Start

In an unprecedented marketing move, the Eames Lounge Chair and Ottoman debuted on national television in 1956. Charles and Ray Eames appeared on Home, the NBC daytime television show hosted by Arlene Francis. Aided by the warmth, charisma and humor of the Eames’, the American television viewing audience immediately fell in love with the Eames Chair. Today, nearly 70 years later, it remains one of the most significant furniture designs of the twentieth century.

Part of the permanent collections at New York’s MoMA and the Art Institute of Chicago, the Chair and Ottoman have been the subject of numerous documentary films and books, and continue to be featured prominently in contemporary design curation.

Authentic Eames Chairs are still manufactured by Herman Miller today, much as they were in 1956. And while the Kazam! process has been streamlined and updated, it remains much the same as it was when the Eames first conceived it in their LA living room — ensuring that these uniquely timeless objects of desire remain a special refuge from the strains of modern living.