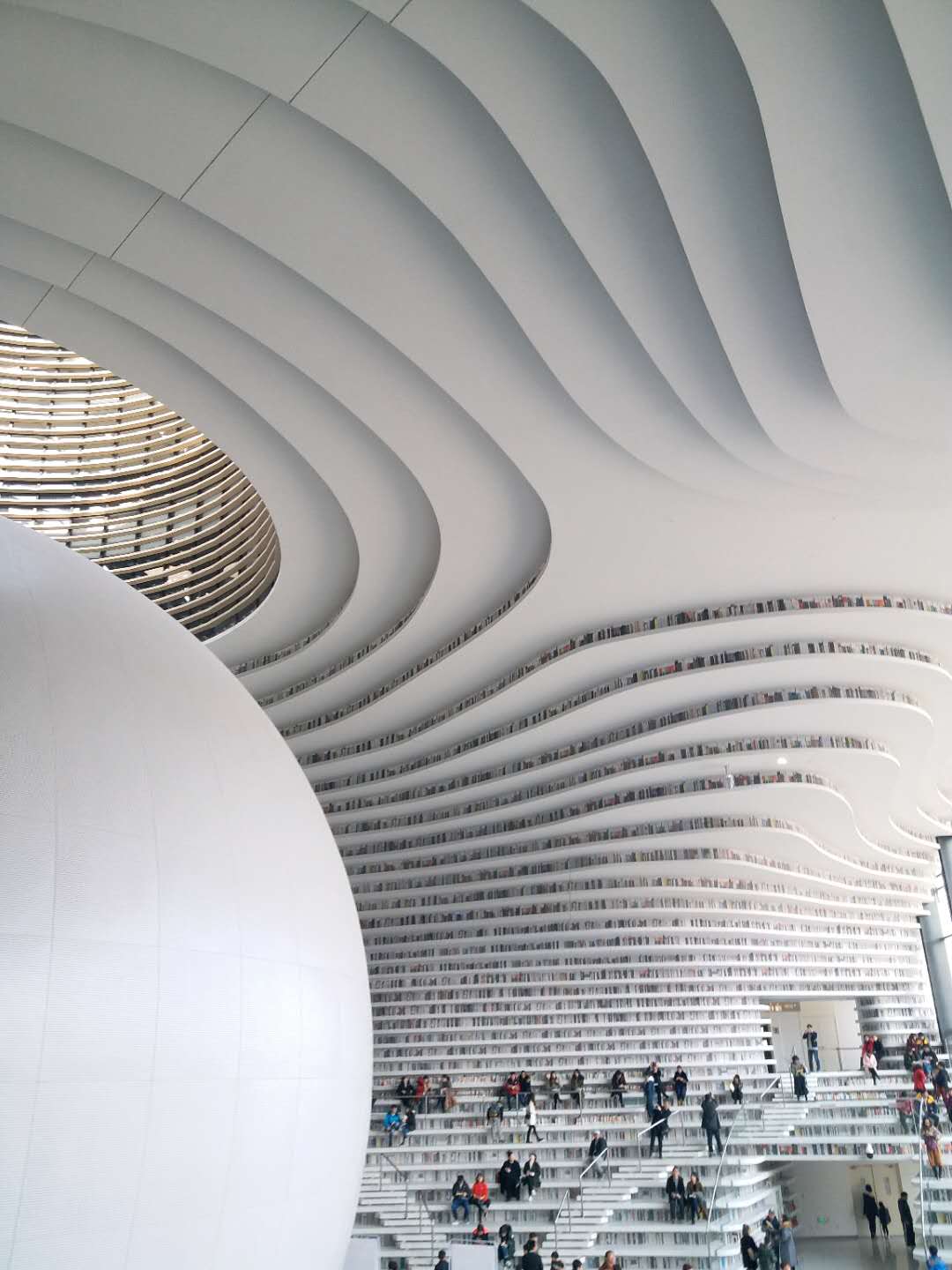 At Optima, our appreciation for innovative design and forward-facing architecture runs deep. We continue to be inspired by pioneering design in public structures of all types across the globe, from museums to municipal buildings and everything in between. Today, we’re exploring some of the world’s most celebrated contemporary libraries recognized by Architectural Digest — from their unique futuristic perspectives to their captivating appetite for inventive design.

Tianjin Binhai Library is one of Tianjin’s newest developments as part of its emerging cultural district, the Binhai Cultural Center. The future-facing library was designed by the Dutch architectural firm MVRDV in partnership with the Tianjin Urban Planning and Design Institute and opened to the public in 2017. The building features more than 360,000 square feet of space, floor-to-ceiling terraced bookshelves and a massive spherical auditorium that sits in its center — and has earned the library its nickname, The Eye. The unique space frequently serves as a hub for education and performance for Tianjin’s residents and expands the horizons for what the future of shared community attractions and libraries might be.

Situated in the heart of Finland’s largest city, Helsinki Central Library Oodi offers unrestrained access and experiences for its guests. Designed by Finnish architectural firm ALA Architects, the library was completed in 2018 and boasts an undulating cloud-like roof that contrasts the harshness of its lower wooden body. The library is assembled with a unique mix of glass, steel and spruce wood and combines various aspects of contemporary design. Its visionary architecture separates the library into three distinct layers: an alive ground level, a tranquil upper level and an in-between space complete with studios, game rooms, meeting spaces and workshops equipped with next-generation technology.

Qatar National Library is a genuine manifestation of contemporary art designed by Dutch firm OMA. The building opened in 2017 and was designed so its focal point — the Heritage Collection — and its entrance reside at its center. Around the center, each of the building’s corners folds up, revealing terraces of marble bookshelves and its People Mover — a one-of-a-kind transportation system that directs its guests throughout its levels. Qatar National Library contains Doha’s National Library, Public Library and University Library, totaling more than a million collective works of literature.

Recalling the silhouette and architecture of Arizona’s Monument Valley and various slot canyons, local firm Richard Kennedy Architects created The Arabian Library on the edge of Scottsdale — only 15 minutes from the Optima Kierland Apartments. The building’s dramatic pre-rusted steel façade complements its stone roof, which is complete with lush, native vegetation. The library’s interior is uniquely designed to mirror the atmosphere of retail and living environments and incorporates an abundance of sustainable materials and technologies.

All works of art in their own novel ways, from their futuristic architecture to their radical functions, these libraries exhibit the best of the best among the world’s most innovative libraries.