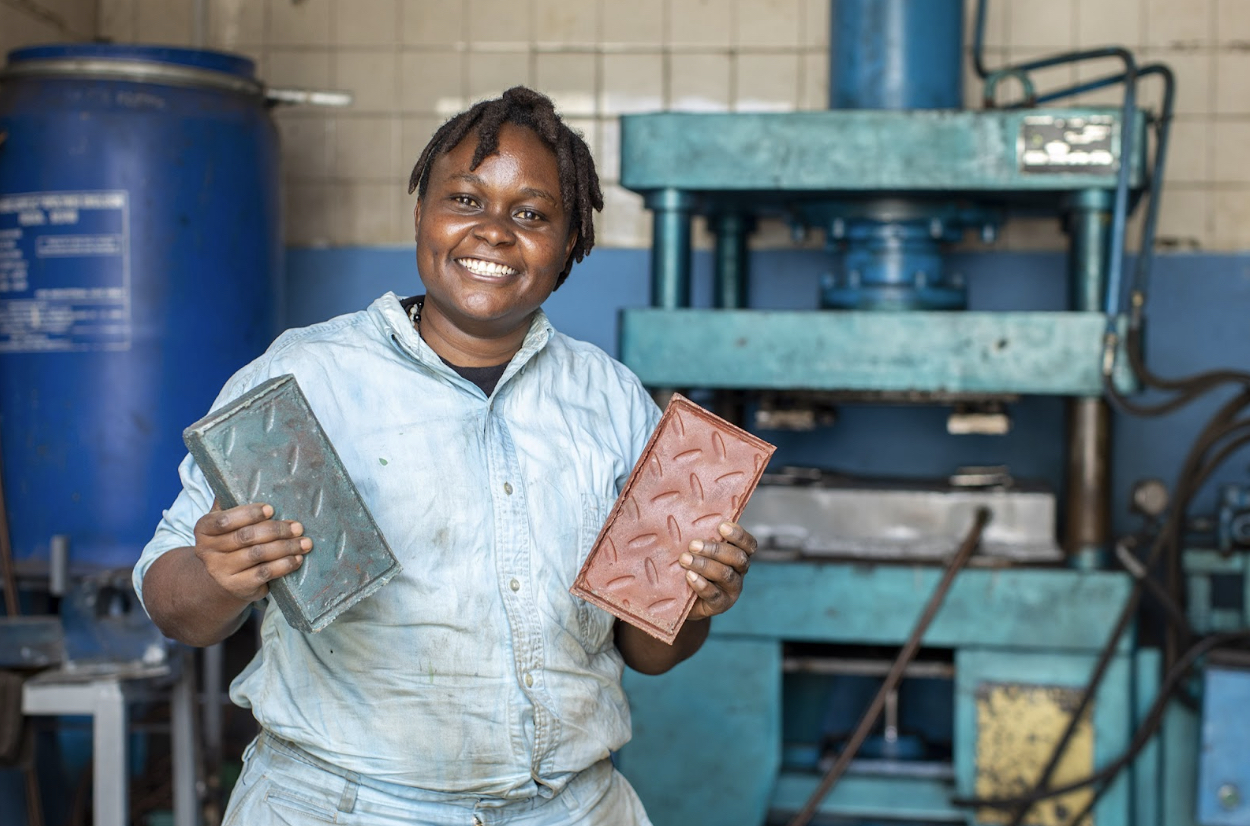 Sustainable design is a valuable part of our ethos at Optima as we strive to create vibrant communities built with the surrounding natural environment at the forefront. Now more than ever before, changemakers across the world are expanding the possibilities for what sustainable designs resemble. Today, we’re spotlighting a leader in sustainable design and affordable construction: Gjenge Makers and its founder, Nzambi Matee.

In 2017, Nzambi Matee, then an engineer working for Kenya’s oil industry, threw everything she knew away to create a startup aimed to address the need for affordable and sustainable construction materials in her home country of Kenya and across the world. Her first thought immediately went to plastic, a material creating pollution problems across Eastern African countries like Kenya, where Matee has resided her whole life.

Thanks to her academic background, including a major in material science, along with experience working as an engineer, Matee understood which plastics would easily bind together and built the needed machinery, allowing her to mass produce the building alternative. Today, Gjenge collects waste materials from local factories and other recyclers and then uses a mixture of plastic and sand to form durable bricks and tiles.

The designs aren’t just sustainable and durable. Matee and the Gjenge team wanted the finished products to emulate a sense of beauty, and today, bricks come in an array of colors, including red, blue, brown and green. Since its founding, Gjenge has transformed more than 22 tons of plastic into various alternative building materials and created more than 100 jobs for local garbage collectors, women and youth.

We can’t wait to continue exploring the ways innovative architecture can contribute to a healthier, more sustainable world, especially with changemakers like Matee impacting the lives of others daily.

As part of our ongoing “Women in Architecture” series, we’re shedding light on a trailblazer for some of Africa’s most transformative architecture, Doreen Adengo. Studying and traveling across various continents, Adengo’s ultimate architectural vision showcases the best of the world’s architectural feats. Learn more about her impactful life and work below:

The Life of Doreen Adengo

Adengo was born in 1976 in Uganda where she lived until she was 18. She moved with her family to the United States in 1994 and studied architecture at the Catholic University of America in Washington, D.C. She then completed her masters degree in architecture from Yale University and began her professional career shortly after.

Her work took her from the United States to Europe early on in her career, where she worked at various architectural studios in London. Following her stint in the UK, Adengo returned home to Uganda where she founded the Kampala-based studio Adengo Architecture in 2015. Much of the work Adengo created while at Adengo Architecture focused the studio’s commitment to developing affordable and sustainable housing projects.

While Adengo had experience designing furniture and participating in research and advocacy focused on urban communities, her most well-known projects include transformative architecture in Uganda.

Found in Bujuuko, Uganda, The Bujuuko Schools consists of three series of one-story buildings that stretch across the sloping land. The school’s were designed with passive techniques to establish comfortable interiors throughout the region’s dry and rainy seasons. Adengo also designed the school to echo the larger community’s appreciation for the outdoors, providing a seamless connection between their interior and exterior.

Still under construction, the L-Building is another of Adengo’s most talked about projects. The mixed-used construction found in Wakiso, Uganda is primarily made of locally sourced clay brick, constructed at the Uganda Clays Factory nearby. The brick is not only used in its traditional building method as a wall, but also as brick-screen and flooring throughout the building.

Beyond her architectural work, Adengo has taught at The New School and Pratt Institute in New York, the University of Johannesburg’s School of Architecture and Uganda Martyrs University.

Adengo is a pioneer for modern Ugandan architecture, transforming the lives of many in the country. Although she passed away in July 2022, her studio, Adengo Architecture, still an active practice today, continues to welcome clients around the world interested in sustainable, affordable architecture and custom furniture. 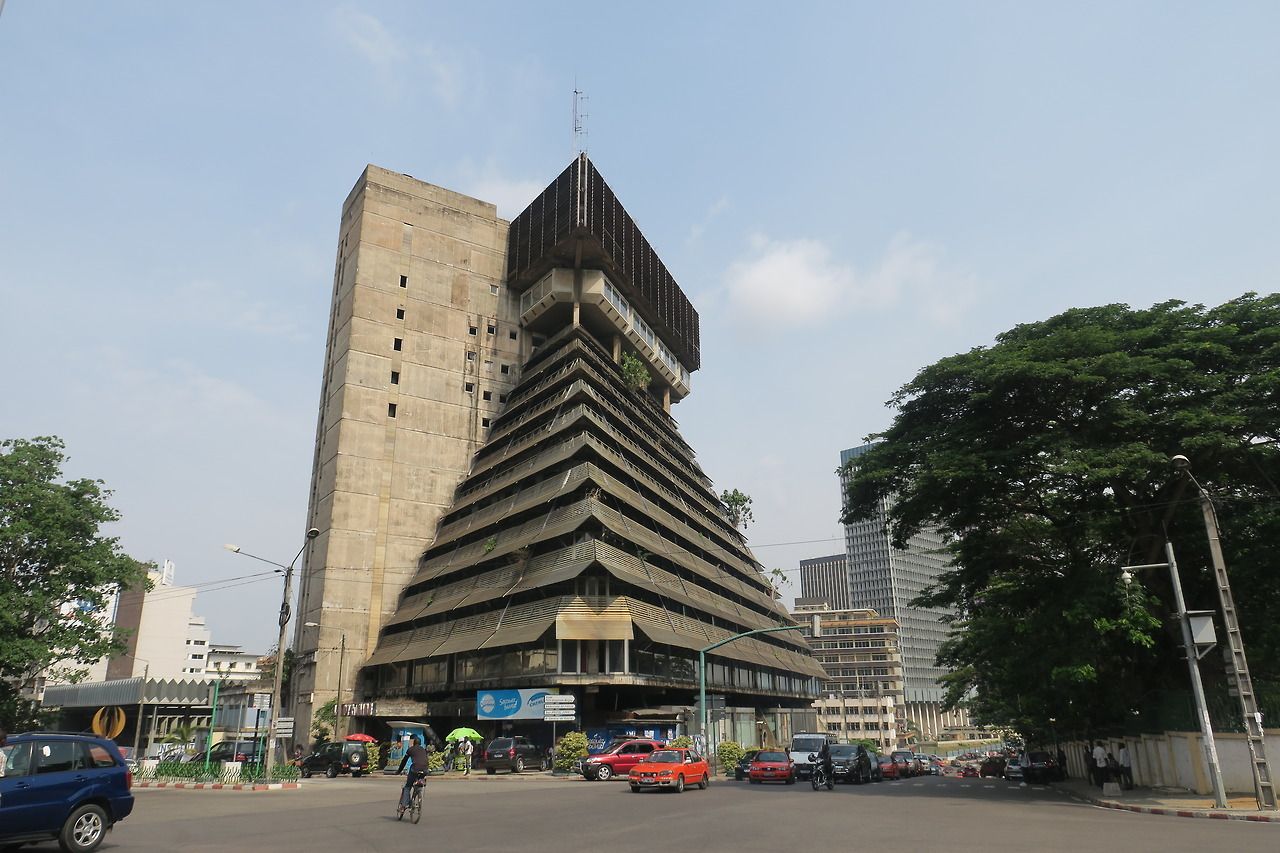 Modernist design not only inspires our work at Optima but, for decades, has also inspired the work of countless other architects and movements across the world. It’s always a delight to explore how Modernist design translates through the influences of other cultures. Today, we’re delving into the rich connections between Modernism and African architecture.

Beginning in the early 20th century, the Modernist Movement traversed the world, leaving its mark on various cultures and countries. Mies van der Rohe and Le Corbusier became pioneers of the movement, and numerous other architects quickly became inspired by their unique perspectives. However, even with its momentum, the movement’s journey to African architecture was prolonged.

From 1957 to 1966, many African nations declared independence from the European colonizers that ruled them for nearly one hundred years. With this newfound independence, many African countries became inspired by the freedom that came with Modernist design. As elected governments started forming, architecture quickly became an asset to them, and hundreds of Modernist wonders flourished, frequently overlooked by the rest of the world.

Even though Africa’s countries had vast differences in their culture and economics, they all shared aspirations for modernity – specifically through architecture – and each created an identity of their own. And by the mid-20th century, everything from educational to ceremonial builds filled with rich cultural significance and symbolism sprouted across the continent.

One of the first builds of modern architecture in Africa belongs to Burkina Faso’s La Maison du Peuple or House of the People. After the country declared independence from France in 1960, René Faublée sought to build a brutalist structure inspired by the country’s native culture for their newly-formed government to meet. After opening in 1965, La Maison du Peuple served as a popular location for political debates and other democratic exercises.

The concrete structure features vibrant colors mimicking the textures and patterns of the earth that surround it. The magnificent lanterns on its roof reflect architecture traditional to Mossi, the nation’s native people, and they also provide natural light to its 2,500-seat auditorium while serving as passive ventilation ducts.

Found in Abidjan, Ivory Coast, La Pyramide is another example of the visionary Modernist designs that sprang up across Africa in the 1960s. Built from 1968 to 1973, it is one of the most famous Modernist buildings in Abidjan, known for being one of the first high-rise buildings in the country. Architect, Rinaldo Olivieri, aimed to capture the bustle of an African market in an urban setting through his design.

The iconic building exhibits a traditional cascading pyramid shape. Olivieri designed the building to house residences for the country’s elite on its top and shops and boutiques at its base. The building has faced some deterioration over its 60-year lifespan, but the Ivorian Government has plans to update its architecture and make it a tourist attraction in the coming years.

Independence Arch is another significant example of the power independence had on Modernist architecture in Africa. The concrete arch was funded and built by Accra’s Public Works Department after Ghana’s independence in 1957. Construction finished in 1961 at Accra, Ghana’s Independence Square – the second largest city square in the world – where the beloved arch shares a home with various other monuments symbolizing freedom.

The monument is made of three towering concrete arches that hold two other structures meant for government use in between their peaks. Underneath, the Eternal Flame of African Liberation, lit by Kwame Nkrumah, the first President of Ghana, still burns.

For decades, African countries brought their perspective and culture to the movement, building some of the world’s most distinctive yet forgotten works of Modernism. Through noticing and appreciating where these styles journey, we gain a greater knowledge and understanding of the world of architecture and architecture throughout the world.