No one can dispute the remarkable benefits of participating in multi-player card games — from stimulating the brain to problem-solving with others, relaxation and relieving stress. And then consider the added perks of being in an exceptionally-designed physical space, flooded with natural light and furnished with comfy mid-century Modern gems. Taken together, what could possibly offer a better way to spend a few hours than settling into the Optima Verdana® card room with three other bridge enthusiasts for a friendly match?

For those who aren’t already in the know, bridge is a four-person card game played by two teams who compete to earn the most points by winning tricks: sets of four cards, one from each player. Players are dealt 13 cards each round, in which they bid on how many tricks they think they can win and determine which suit trumps the others. While the origins of bridge are not definitively known, a similar game called khedive appeared in Constantinople before 1870, and a nearly-identical game had been played in Greece prior to that. The game of bridge eventually made its way to New York society in 1893, and it has been a staple in our leisure culture since then.

Today, according to the American Contract Bridge League, a whopping 25 million Americans over 18 know how to play, even though this is far fewer players than in the 1950s, when at least one person played bridge in 44 percent of U.S. homes. In the past several years, there has been a dramatic onboarding of new players of all ages, very much a result of sequestering at home during COVID-19. 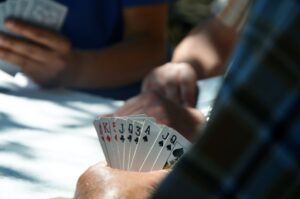 The single best way to learn bridge — and to continue to improve — is simply by playing. And don’t be afraid to read bridge books, listen to podcasts and exchange tips with fellow players. Check out these great bridge resources for endless ways to make bridge playing part of your everyday life. And when you’re ready to take advantage of Optima Verdana®’s extraordinary space to gather and game, grab a fresh deck of playing cards, a few friends and enjoy!