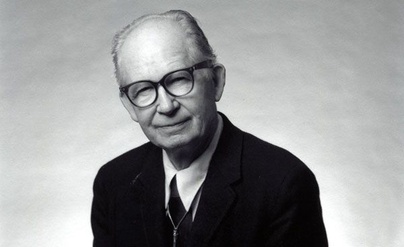 If John Lloyd Wright’s name sounds familiar, it’s because his father, Frank Lloyd Wright, is an icon in the architecture world. But his son left his legacy with something more playful; John was the original inventor behind Lincoln Logs, a childhood toy many cherish fondly. So how did the son of an architect come to invent one of the most well-known toys in America? Today, we dive into John Lloyd Wright and the story of Lincoln Logs, and an interesting piece of architecture trivia.

John grew up in Oak Park, Illinois in a home designed by his father, now known as the Frank Lloyd Wright Home and Studio. He was immersed in the world of architecture from a young age, but his childhood was far from perfect. After Frank Lloyd Wright abandoned his wife and children, the two became estranged and their relationship never fully recovered. However, John decided to pave his own way, determined to get out of his father’s shadow.

In his early years of practice, John worked on the West Coast and the Midwest before agreeing to work with Frank on Tokyo’s Imperial Hotel in Japan. The two were faced with the challenge of building a structure that could withstand the frequent earthquakes of Japan, and their original design used a system of interlocking timber beams to let the hotel to sway but not collapse. Before the hotel was even constructed, father and son once again parted ways, this time over a dispute concerning John’s salary.

Now out of work, John turned his attention to his passions and hobbies, including toy design and invention. Taking inspiration from the plans of the Imperial Hotel, he perfected the idea for Lincoln Logs in 1916. Using notched pieces of wood for the miniature logs allowed the toys to withstand playtime instead of earthquakes. Wright received a patent in 1920, eventually selling it as Lincoln Logs grew in popularity.

After his years dedicated to Lincoln Logs, John returned back to the world of architecture, designing a handful of buildings and homes in the Midwest. John’s legacy in the world of toy design is one that has spanned decades, with Lincoln Logs inducted into the National Toy Hall of Fame in 1999. More than 100 years after their inception, Lincoln Logs are still a toy well-loved by generations — and potential young architects.