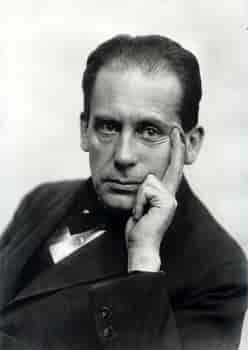 Born Walter Adolph Georg Gropius in May of 1883, the German architect was destined for great things from the start of his earlier career just 25 years later. In 1908, after studying architecture in Berlin and Munich, Gropius began working with renowned architect and industrial designer Peter Behrens, alongside other powerhouses: Ludwig Mies van der Rohe and Le Corbusier. From that point onward, Gropius’s career accelerated at an upward trajectory, with accomplishments such as Faguswerk, the Fagus Factory that truly put his name on the map in 1913.

In 1919, Gropius succeeded the previous master of the Grand-Ducal Saxon School of Arts and Crafts in Weimar — and Gropius then transformed this academy into the Bauhaus. Gropius’s founding philosophy behind the Bauhaus was revolutionary. On a flyer from that time, he stated: “Art and the people must form an entity. Art shall no longer be a luxury of the few but should be enjoyed and experienced by the broad masses. The aim is an alliance of the arts under the wing of great architecture.” The Bauhaus’s legacy became the extension of beauty and quality to every home, through well-designed, industrially-produced products. Though Gropius left the Bauhaus in 1928, the impact of the school remains prevalent across Modernist design today.

Facing threats under the Nazi regime, Gropius first landed in England and then made his way to the U.S. in 1937. There he became a professor at Harvard and eventually, the Director of the Department of Architecture. In 1946, he founded The Architects’ Collaborative (TAC), another manifestation of his belief in collaboration and teamwork. Alongside the likes of other young architects in Cambridge, the group rose to prominence (with their most well-known work being the Graduate Center at Harvard) and they quickly became one of the most well-known and respected architectural firms in the world.

Today, the legacy of Walter Gropius remains in each structure he created during his lifetime, as well as in the profound impact he had on the architectural world.