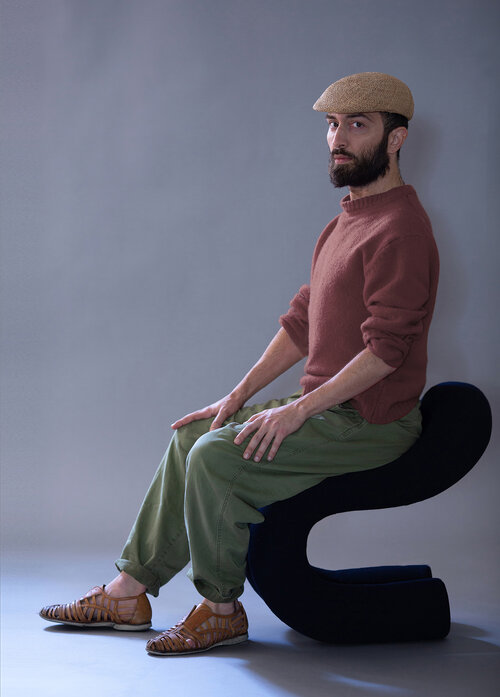 We love being part of a long legacy of people designing in the Modernist discipline. From architects, to sculptors and artists, to furniture designers, many creators continually innovate and find new ways of exploring form and function. One such innovator is Ara Thorose, a queer Armenian American artist and designer currently based out of Brooklyn, whose cylindrical-form furniture pieces are taking the design world by storm.

Ara Thorose is a fresh face on the scene. He earned an undergraduate degree from the University of California, Irvine, in Sociology, with a focus on gender and sexuality. Most recently, he went on to earn his MFA in 3D Design from Cranbrook Academy of Art. Cranbrook was founded as an experimental artists academy, and has since held national acclaim as the “incubator” of mid-century modernism in recent decades. Makers who emerge from the school are often agents of change who quickly make a name for themselves, and Thorose is no exception.

Just two years after earning his MFA, Thorose debuted his inaugural work, Tubular Group 01, under his brand Soft Limits, at the Architectural Digest Design Show in 2017. His work in the show garnered critical acclaim for its innovative form and experimentation in cylindrical forms. The design world continued to take notice of Thorose: he was named Up and Coming by Surface Magazine, and Soft Limits received Interior Design magazine’s 2019 Best of Year Award for Accent Seating.

Under his brand, Soft Limits, Ara Thorose designed Ulu Group, a series of cylindrical-form furniture pieces “inspired by the idea of a circle trapped inside of a square.” Most notably, the cylinders in the collection got their circumference from Thorose’s own thigh circumference. Thorose describes this as a humanizing element, which serves to ground the abstract nature of his work.

On his website, Thorose describes the theory behind Ulu Group, stating: “It represents conflict with no apparent solution. A circle is limitless, while a square is limited, so it’s inherently problematic. By adding a third dimension to it’s premise, there is potential for functional solutions. That’s the inspiration for this series. Each form is a circle traversing cube-like spaces held by furniture. Alternating between U-turns and L-turns, the cylinders push against the boundaries of familiar typologies.”

The collection includes four total pieces — Ulu Chair (orange), Ulu Duo, (mauve), Ulu Table (brown), and Un (green) — made of steel and foam and upholstered in wool and silk. Thorose begins his design process with hand building small-scale maquettes and then sketching his revisions in profile.

Thorose is a deeply individual figure in the realm of furniture design today. He describes his perspective, stating: “I’m inspired by the notion of autonomy. I view the self as fluid and dynamic. My work explores the creative potential of self awareness without conforming to surroundings. Singular and succinct unto itself. An individual sense of being and order.”

We look forward to seeing how this point of view develops and grows as Thorose continues to inspire the industry.