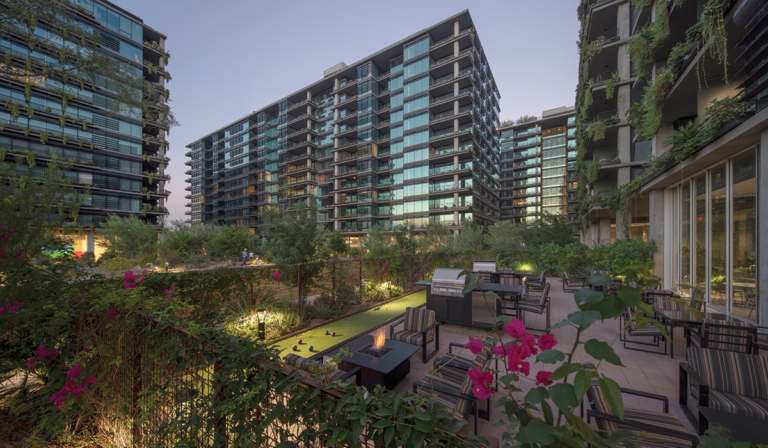 Sales at 7180 Optima Kierland, the newest tower within the $500 million Optima Kierland development from leading multifamily developer Optima, reached 85% last month as it averages 4.5 sales per month since January 2020, making it among the top two fastest-selling luxury condominium developments on the West Coast. That average is approximately five times greater than the rest of the market, where a typical new condominium development averages only 0.89 sales per month.

“Of the eight West Coast condo markets we track, Phoenix has proven to be the most resilient in the wake of COVID-19 and 7180 Optima Kierland stands out as the fastest-selling condominium community in the state of Arizona,” says Paul Zeger, partner of Polaris Pacific, a leading sales and marketing brokerage that tracks condominium market trends. “Compared to other urban cores such as Los Angeles and San Francisco, the Phoenix-metro market stayed more active during the months of the pandemic. Therefore, the area’s growth can be seen more like a continuation of pre-COVID trends rather than merely a rebound from depressed spring and summer sales volumes that many other West Coast cities had to overcome.”

With only 32 residences remaining for sale priced from the $500,000s to more than $2 million, 7180 Optima Kierland is comprised of 202 one-, two- and three-bedroom homes, plus a collection of premium penthouses perched atop the highest floor that will be unveiled in March 2021.

The biggest draw for buyers has been the array of lavish amenities, both on the rooftop and the ground level. Set atop the 12th floor is the spectacular Sky Deck, which was designed with a negative-edge view, with the railings lowered just beyond the sightline, so the eye goes straight to the vistas beyond and gives the sensation of floating above the city. Among the development’s other amenities for fitness, relaxation and entertainment, its Sky Deck offers residents Arizona’s first residential rooftop running track.

Among the building’s most unmistakable features is it’s next-generation vertical landscape system, with self-containing irrigation and drainage that enables a palette of vibrantly colored plants at the edge of each floor to grow both up and over the building. 7180 Optima Kierland displays the next evolution of Optima’s award-winning, green-building design created by David Hovey Jr., AIA, president and principal architect of Optima.

Did you Know: Optima is known for cutting-edge, residential buildings that have been nationally and internationally recognized with more than 75 prestigious awards for the company’s commitment to design, innovation and sustainability.

Read the full feature on InBusiness