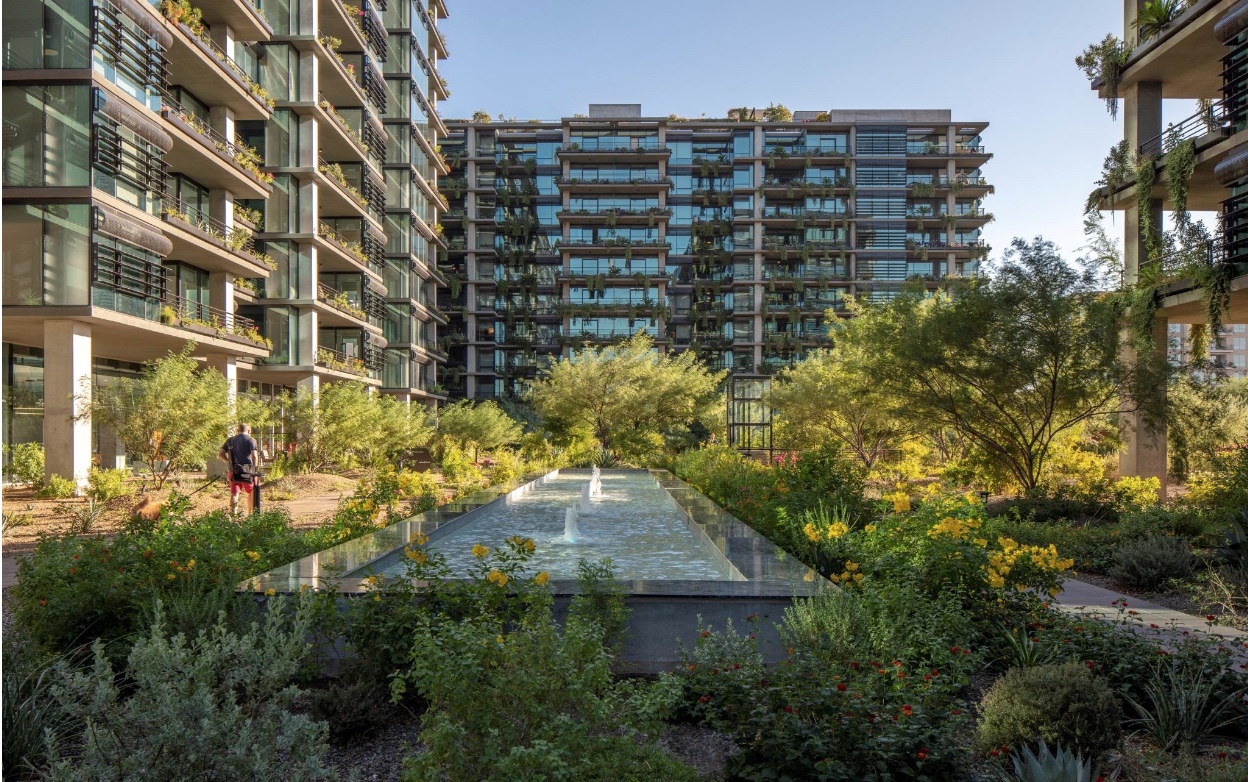 Optima Kierland Center and Optima Sonoran Village received top honors this year by being recognized as the top multi-housing developments by the American Architecture Awards.

The American Architecture Awards are the country’s highest public recognition for architectural design excellence given by a non-commercial, non-trade affiliated public arts, culture and educational institution — and a big deal to Optima and its president and principal architect, David Hovey Jr., of Scottsdale.

Not only is the award an honor for Hovey, but it is also a testament to the architectural efforts of Hovey and his father, David Sr.

“My father and I work very closely together on all of our projects and work together on every detail with our team,” Hovey Jr. said. “Both developments share the same principal philosophy to create sustainable architecture with an open park-like setting, pedestrian shaded courtyards and lush landscaping.”

Though the two buildings are alike in construction, the two have differentiating features.

“For Optima Sonoran Village, we focused on a design concept that celebrated how the native desert plants bloom and it’s been great to see how the building relates to the plants that were chosen for this project’s vertical landscaping system,” Hovey said.

“Every month there is a different plant on property in bloom and it changes the entire feel of the project.”

The Kierland complex, on the other hand, uses the nearby complexes to its advantage.

“For Kierland, the design concept was to create an open grade level plan that was heavily landscaped and evolve our vertical landscape system,” Hovey said.

“It was a great opportunity to provide luxury apartments and condominiums directly across the street from the world class Kierland Commons and Scottsdale Quarter open pedestrian friendly shopping and entertainment districts.”

Despite these differences, Hovey and his father ensured that there were distinct similarities between their masterpieces.

“Both sites are roughly 70 percent open space at grade-level and though each looks quite different from the other, the buildings share a common architectural language of undulating elevations, expressed concrete structures with large, cantilevered corners, expansive decks and open space, and our signature Optima vertical landscaping system.”

The buildings also offer two ideal locations for tenants looking for activities to get out of the house, Hovey Jr. said.

“Optima Kierland’s location across the street from both Kierland Commons and Scottsdale Quarter, and Optima Sonoran Village’s proximity to Old Town and Fashion Square offers residents the opportunity to walk to the best restaurants, shopping, and entertainment venues in Scottsdale,” he said.

Hovey has found himself having to adjust the building to accommodate the needs of tenants.

“The sharp increase in home-based work prompted the addition of more conference spaces, glass-enclosed private huddle rooms, as well as distributed antenna services throughout the buildings for resident use,” he said.

Because of the updates and adjustments, this prize is quite the pat on the back for the Hovey’s and Optima.