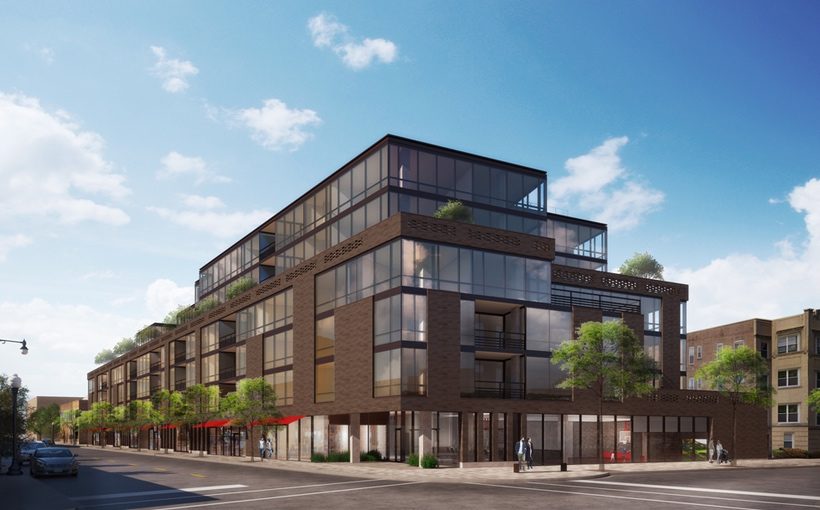 Developers have started construction on a seven-story luxury apartment building that will replace the neighborhood’s Treasure Island Foods, which closed in 2018.

Optima’s project at 3460 N. Broadway will bring 198 one-, two- and three-bedroom rental apartments and street-level retail space to the neighborhood, according to a news release from the developer. It’s set to be finished in 2022.

The building will feature 40,000 square feet of amenities, including a sky deck with a pool, spa and party room; an indoor basketball court; a golf simulator and putting green; a fitness center; a yoga room; a dog park and pet spa; a children’s play area; a game room and a demonstration kitchen.

Floor plans for units average 1,053 square feet, giving residents who work from home extra space to set up an office, developers said. The building will also have two conference rooms and a business center.

As a transit-oriented development — it sits about a half-mile from the Addison Red Line station — the building will have 98 fully-enclosed parking spaces and storage for 208 bicycles, developers said.

The project faced pushback from neighbors last year who were concerned the building was too big and too dense for the site near Broadway and Cornelia Avenue.

The initial design called for an eight-story building with almost 250 units before it was scaled down, according to the Tribune.

David Hovey Sr., a fellow of the American Institute of Architects and CEO of Optima, said he designed the building’s facade to blend in with the rest of the Lakeview community.

The exterior features a palette of warm-toned materials, such as bronze glass and dark brick, and the building has a series of deep recesses and setbacks, allowing for landscaped terraces on its upper levels.

An atrium will be built in the center of the building with a skylight on the roof, developers said. Apartments and building amenities will be built around the atrium.

“We’re always looking for ways to bring light and connection to nature into our projects as people crave these elements, especially now as many of us are spending more time in our homes,” Hovey said.