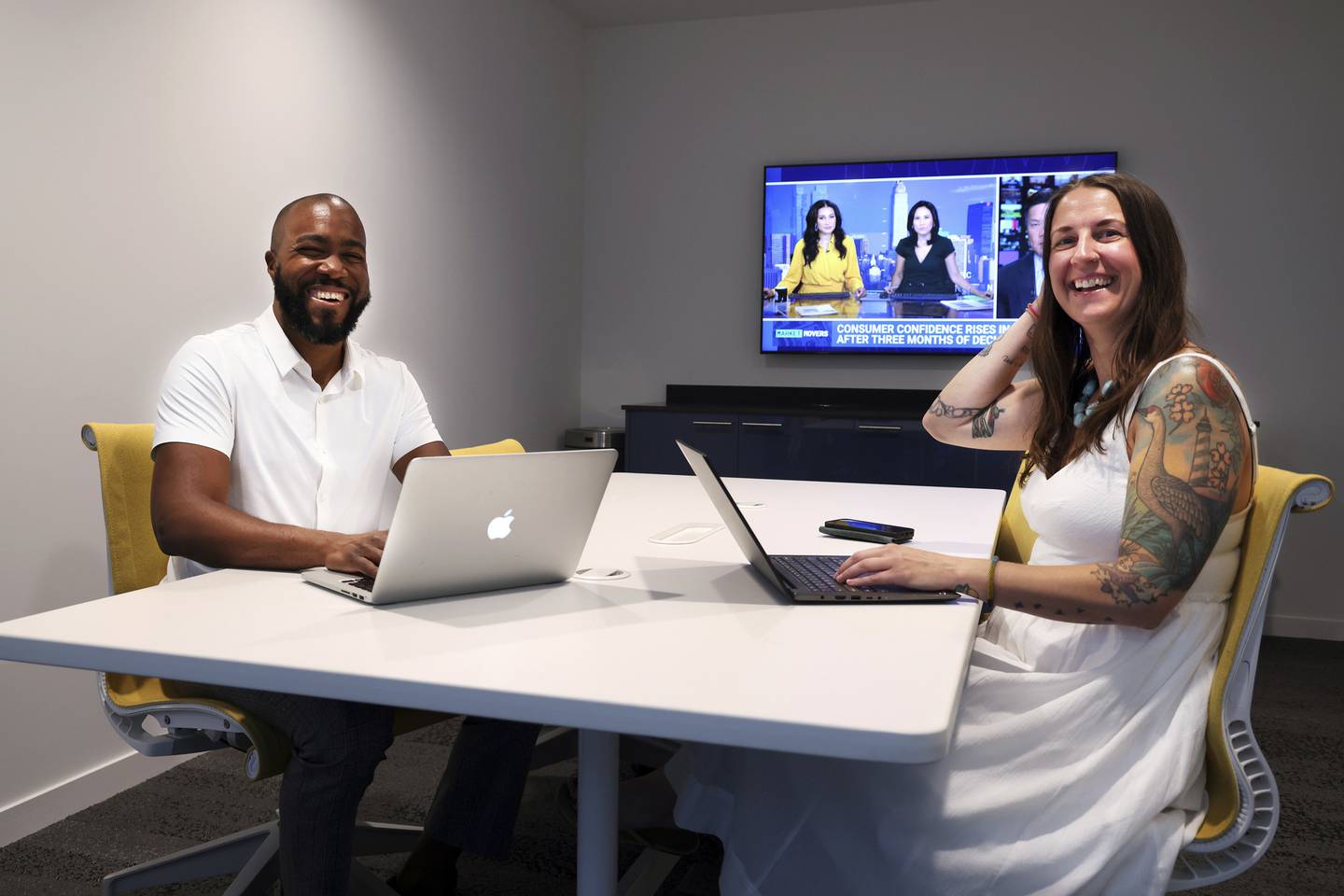 Companies are Using Carrots, Not Sticks, to Get Workers Back as Hopes Fade for Post-Labor Day Return to the Office

Michelle Feuillerat works remotely most days but makes a special effort to come into the office on Mondays or Fridays, which her firm, Zurich North America, dubs bring-your-dog-to-work days.

The executive assistant loads Sunshine, her yellow Labrador retriever, into the car and drives from her home in northwest suburban Crystal Lake to the insurance company’s Schaumburg headquarters, where Sunshine cavorts with other employees and their dogs.

“I have a great group of cubicle mates who love my dog,” she said. “It brings a real sense of community and everyone has been excited about the opportunities to meet new people and new dogs.”

Company officials believe pet dogs bring a touch of home to the office. It’s all part of an effort to change workplace culture and encourage employees to return to the office, at least for several days per week.

“We have been very focused on making sure employees are comfortable with the environment,” said Zurich North America Chief Human Resources Officer Laura Rock. “It’s not just an office where you sit in front of your screen doing Zoom calls.”

Most Chicago-area firms are adapting to COVID-19 the same way. Instead of giving employees hard deadlines to leave comfy home offices, most are enticing people back with new amenities and perks, including the option to stay home for a portion of the week.

It’s a big change from how the return to the office was first envisioned, according to market experts. Many companies planned to make a sharp break with the past after the Labor Day holiday, designating it as the date when workers finally returned. Similar hopes were pinned to the first two Labor Days of the pandemic.

But the tight labor market, and the difficulty in recruiting new hires, means popular work-from-home options are here for the foreseeable future. That leaves uncertainty hanging over a market already plagued by high vacancies, because it could take office users months to calculate just how much space they will need in the future.

“The conversations over the past couple of years has gone from ‘We’re going to return when it’s safe’ to ‘We’re going to do what the employees want to do,’” said Jim Adler, executive vice president of commercial real estate firm NAI Hiffman. “So, there is a little bit of a tug of war going on, but (employees) have been shaping the return to the office.”

Zurich North America began allowing dogs in April, and over the past six months brought other new touches to its gleaming, 11-story complex, first opened in 2016 and familiar to anyone driving through Schaumburg on I-90. The company broke down some walls on the 11th floor to create more open spaces, and the facility also now includes a cafe that serves beer and wine in the late afternoons, new outdoor patio furniture and a fire pit.

But it’s the dog days that Feuillerat, who started with the firm in April, said she finds special. Feuillerat doesn’t have a set schedule of in-office days but does come in when she needs to meet someone in person, and if it’s a Monday or Friday, Sunshine makes it easy to break up the routine and get to know other dog lovers.

“I meet people from different departments that I probably would never get a chance to meet, but we all bring and bond over our dogs and also learn about each other’s lives,” she said.

Feuillerat said eliminating her commute on most days also makes it easier to juggle work responsibilities while taking care of Sunshine, other pets and her two children.

“I find myself being more productive because I don’t have that 35-to-40-minute drive from Crystal Lake,” she said.

Only a tiny number of the 2,200 employees assigned to Zurich’s Schaumburg headquarters now come in four or more days a week, according to Rock. Roughly 30% of its 9,000 employees across the nation work remotely because they’re out in the field meeting clients, and the rest visit their office between one and three days per week.

Zurich isn’t setting hard deadlines for office workers who don’t show up often, Rock said. Remote working has been largely successful for Zurich, with high productivity, so leaders will be content if employees starting after Labor Day return more frequently over an extended period as their comfort increases, eventually forging new routines, with working hours split between work and home.

“Post-pandemic, it’s just how we work,” Rock said. “Employees are expecting that level of flexibility from their employers.”

Insurance firm Allstate Corp. took an even bigger step than Zurich. In 2021, company officials announced they were selling Allstate’s 2 million-square-foot headquarters in suburban Northbrook for $232 million and moving to a much smaller building in Chicago’s Loop because so many employees were working remotely.

According to a 2022 Pew Research Center survey, 61% of those working from home now prefer it over their office jobs. That’s a big shift from early in the pandemic, when 36% of those surveyed said they chose to work at home, with the remainder doing so simply because their offices had closed.

Commercial real estate firm JLL surveyed office employees this year and found that most want jobs with work-from-home options, with technology and finance workers stating that such flexibility is the equivalent of a 10% salary increase. JLL also forecasts that more than half of companies will offer remote working to all employees by 2025.

“I was with a financial client yesterday who has 60 positions to fill,” Adler said. “And they told me the first question from every job applicant is what the hybrid schedule looks like.”

The tight job market means employers have good reason to be accommodating, for now at least, said Cassandra Francis, principal of Kariatid, a Chicago-based real estate planning and management firm. And with so many employees loving the freedom of working from home and skipping long commutes, whether companies can successfully lure people back is still unknown.

“We’re in this strange place where even though we’ve had high inflation and rising interest rates, employment is still high, so it’s very hard to find people,” Francis said. “Employees still have more leverage and just a bit more say.”

U.S. Bureau of Labor Statistics data show the U.S. economy created 528,000 new jobs in July, and the unemployment rate sank to 3.5%, reaching the pre-pandemic rate and tied for the lowest unemployment rate since 1969. August was another solid month, with 315,000 jobs created.

But young people and new hires are likely to be required by many corporate leaders to spend more time in the office, Adler said.

“I think there are some strong opinions that workers, especially ones in their 20s and 30s, need to be in the office more than they realize,” he said.

Rock said she agrees. Zurich fills many of its apprenticeships with young people just out of high school, and both this group and other new hires will spend significant time at headquarters, meeting with coaches and mentors to learn how the insurance industry works.

“There is a certain value to doing that in person,” she said.

Other Chicagoland firms are adopting similar strategies. Discover Financial Services decided that the first cohort of 75 hires for its new data analytics center will work at the firm’s downtown Chicago office at 350 N. Orleans St. for three days a week, according to spokesperson Matthew Towson. A new cohort of at least 75 will join the program in 2023.

Workers did return to Chicagoland offices in greater numbers over the course of this year. According to Kastle Systems, a security firm that tracks card swipes, the metro region’s office occupancy hit 42.5% on August 24, almost equal to the national average and up from 27.1% in January.

But large-scale use of remote working seems likely to continue for a long time at firms such as Discover.

“The company overall continues to employ a hybrid work model where employees have the option to work fully remote or in the office,” Towson said. “This applies to new hires as well who are not part of the (new data analytics) program.”

Working at home, with all the conveniences and comforts, is just too alluring to give up, said Desmond Lathan, a property manager and leasing agent who runs a four-person team for Chicago’s Fulton Grace Realty.

“Prior to the pandemic, I was in the office every day, but it’s changed the way I look at going to the office,” Lathan said. “I’ve run my business from my home for two years now, and I’ve found that people are equally productive at home.”

Lathan said moving into Optima Lakeview, a seven-story apartment complex that opened earlier this year in the Lakeview neighborhood, made working at home even easier. Like an increasing number of apartment developers, Optima provides its residents, many of whom work from home, with high-tech conference rooms and a business center, among many other amenities.

“When it’s time for our weekly meeting, I’m saying: Where do I want to be, in my office, in my home or in Optima’s conference center?” Lathan said. “Everybody has choices now.”

Other large corporations claim they’re also all-in when it comes to mixing remote and in-office work.

“We know that the workplace has changed as a result of the global pandemic and we see a flexible hybrid work schedule as the future and new normal for Groupon,” said Nicholas Halliwell, spokesman for the Chicago-based daily deal company, which has about 800 Illinois-based employees and still occupies office space at 600 W. Chicago Ave. on the Near North Side.

“While it’s still early, many Grouponers have favored a remote working environment, although some are also adopting a hybrid approach,” he added. “We’ve also made the decision to open up most of our open U.S.-based roles to remote work, which is showing some promising, early returns in our efforts to recruit the best, diverse talent.”

Even companies committed to bringing people to the office almost every day recognize the need for some remote work. About 60 people work at the South Loop headquarters of James McHugh Construction Co., and other than during the initial COVID-19 emergency in early 2020, most are in the office every weekday, according to company President Michael Meagher, largely to show solidarity with their construction workforce, which is in the field on job sites.

“Our office culture is that we’re here to support the field,” Meagher said. “And it’s hard for us to support them effectively and then turn around and say, ‘we can work wherever we like.’”

The company does allow a limited amount of remote working, but typically it’s just one day per week.

“We think we needed to do that to be more competitive in the marketplace,” Meagher said.